I am aware that the category of Astrology, Global Geography, and the history of the Asiatic Nation (African-American), will conflict with nine out of every ten people of the US especially those often referred to as Negroes, Blacks, and African Americans ranging between 45 and 60 years of age, owing to the educational system. Therefore, I concede that the category of science mentioned would appeal to the youth of tomorrow, those who will approach the ages of 18 to 29 by 2019. The restoration of civilization relies upon the ability of this group during the next 170 years of global, economic, and social revolution.

These people accept, without question the beliefs of those among whom they are born and reared and will disbelieve, even the evidence of their senses rather than disband with the impractical emotional beliefs, which have grown in them.

The song of numbers to the universe, suns, and planets also triple darkness, for darkness is the limit of space, under and back of the universe of time-space and change is ever to be found.
The Three Qubalistical Veils of 360 - and + (Pro-Neu-Elect) Proton Neutron Electron and that part in between and outside of the dark matter.
000-Triple Darkness-Ain (Ain)
00-The Limitless-Ain Soph (Ain Svp)
0-The Limitless Light-Ain Soph Aur (Ain Svp Avr) 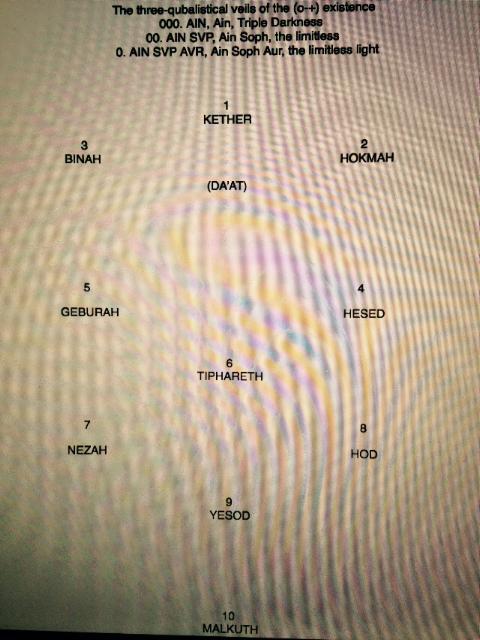 In all current works upon the Kabala (Kabbalah), therefore, being copied from older works, we find emanation 2-4-7 constituting the Tree of Good (These words good and evil are not in the same meaning as man sees them but of the knowledge of good and evil, not the act itself), 3-5-8 the Tree of Evil, and 1-6-9-10 the Tree of Life, the Shekinah, or Pillar of Mildness. The correct diagram is given supra, where it will be seen that as should be, the even, or esoteric, numbers 2-4-8 constitute the right-hand Pillar of Goodness, and the exoteric numbers 3-5-7 constitute the left-hand Pillar of Evil. Also, it will be seen that the necessary planetary correspondences to each of the emanations when arranged latterly will place benefic planets on the Tree of Good and malefic planets on the Tree of Evil.

Remember the definitions of the seventh emanation and the eighth emanation have been switched, they should read as such. The Seventh emanation is Netzach, meaning Splendor, and symbolizing God or infinity one of the perfect numbers. It corresponds to the planet Mercury, the foot of the Tree of Evil, and is negative to the instincts and impulses of Mercury.

God, Himself, is both Father and Mother just as man has the male gene Y and the female gene X. The word Elohim, translated in Genesis as God, is Feminine plural Masculin Singular; but the European translators of the Bible, not wishing women to share in anything Divine, have rendered it throughout in the Masculine singular. There is, however, an inadvertent admission of the Father-Mother principle when Adam is said to have been made in the image of Elohim, Male and Female made He them (XY). Hebrew scholars from the Chezz Nation of Hebrews, Asiatic Black Men with Professorships in the Ancient tongs, teach that Eloh is the feminine plural and that the ending [IM], is a termination of the masculine plural, the two being used together to indicate a feminine potency united to a masculine idea, therefore, they are Angles or Asiatics from knowledge to 'born' in the Kabbalah and then you see both of this in man on the 10th degree (Malkuth). Throughout the Kabala, The Ancient of Days is considered both Male and Female, and the Ten Emanations are divided into 3 positive, 4 neutral 3 negative attributes.