The Flat Earth movement is a religious movement based on European interpretation of the Bible, mostly King James Version 1611 ace. Modern flat Earth hypotheses originated with the “English” writer Samuel Rowbotham of Anglo-Saxon origin (1816–1884). Based on his conclusions derived from the Bedford Level experiment, Rowbotham published a pamphlet, called Zetetic Astronomy, in which he teaches that Earth is not a Globe, the hypothesis in the Earth is a flat disc centered at the North Pole and bounded along its southern edge by a wall of ice, with the Sun and Moon 3,000 miles and the "cosmos" 3,100 miles above Earth.

He also published a leaflet entitled, The inconsistency of Modern Astronomy and its Opposition to the Scriptures" of The Bible King James Version 1611, which argued that the Bible, alongside our senses, supported the idea that the earth was flat and immovable and this essential truth should not be set aside for a system based solely on conjecture.

So at the end of the day, the European are at it again, trying their best, to teach all their theories, as if they are fact, based on the gods of Europe called Christianity and or the Bible. These are the same people who gave us that book and then gave us Nothing but hard times, hunger, nakedness, and out-of-doors! History: In 1861 Rowbotham settled in London, producing 14 children, of whom 4 survived. He was also alleged to be using the name, Dr. Samuel Barley, selling secrets for prolonging human life. In his book Zetetic Astronomy, the Earth 'not a Globe' appeared in 1864. After Rowbotham's death, Lady Elizabeth Blount founded the Universal Zetetic Society which attracted thousands of followers, published a magazine entitled The Earth 'Not a Globe' Review, and remained active well into the early part of the 20th century. After World War I, the movement underwent a slow decline, but it was revived in 1956 as The Flat Earth Society. In the United States, Rowbotham's ideas were taken up by the Christian Catholic Apostolic Church and promoted widely on their radio station. His work in the United States was continued by William Carpenter. Carpenter, a printer originally from Greenwich, England, and a supporter of Rowbotham published ‘Theoretical Astronomy Examined and Exposed Proving the Earth 'not a Globe' in eight parts from 1864 under the name Common Sense. So now you tell me if the second degree in the 1-10 is true or not?

All I can do is Shake My Head at these Europeans and our Asiatic Brothers that flow the gods of Europe that we know nothing of. In 1956, Samuel Shenton created the International Flat Earth Society as a successor to the Universal Zetetic Society and ran it as the organizing secretary from his home in Dover, England. The society also claimed that the Apollo Moon landings were a hoax staged by Hollywood, (a position also held outside the Flat Earth Society). In 1969, Shenton persuaded Ellis Hillman, to become president of the Flat Earth Society; but there is little evidence of any activity on his part until after Shenton's death when he added most of Shenton's library to the archives of the Science Fiction Foundation he helped to establish. Shenton died in 1971, Charles K. Johnson, inheriting part of Shenton's library from Shenton's wife, established and became president of the ‘International Flat Earth Research Society of America and Covenant People's Church in California’. As I said once before this is a Christian religion, not a science. Flat Earth Society recruited members by speaking against the U.S. government and all its agencies, particularly NASA. Much of society's literature is focused on interpreting the Bible to mean that the Earth is flat, although they do try to offer some scientific explanations and evidence for this hypothesis. 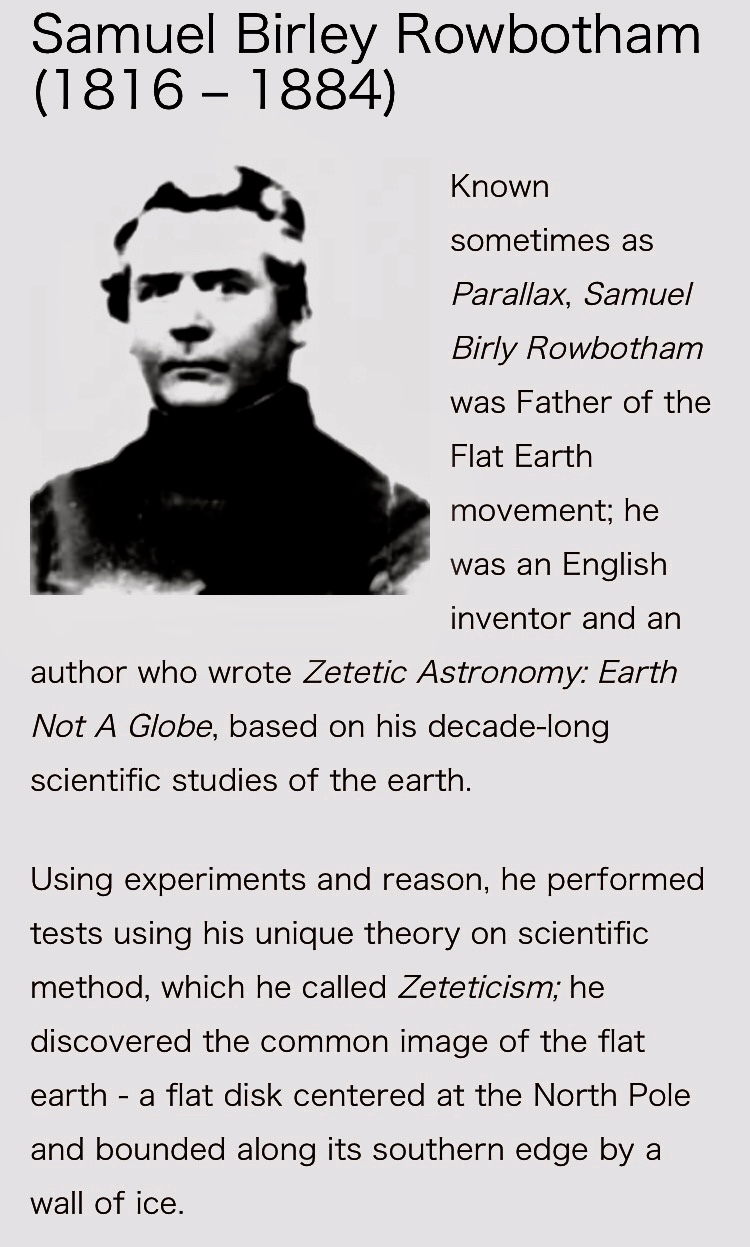