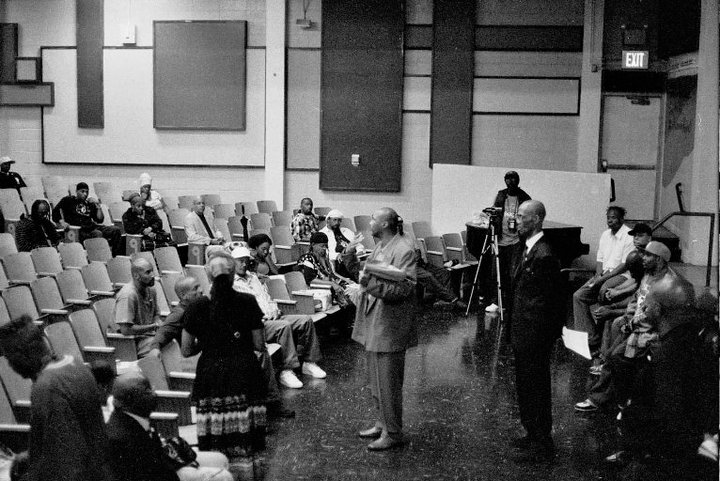 Born Justice: "Peace God, Allah The Father, left Temple number 7 in 1963, First Born Prince and God Supreme say the same thing, Peace; He was teaching in the Temple in 1963 and left in June or July He was there for three and one-half years 1960-1963.

Because of affiliation with the Five Percent Nation, inmates have been put into solitary confinement for years. They are only allowed 5 hours of exercise a week, but the service makes them stay in handcuffs and leg chains, they also only receive limited visits per month. Where the Department of Corrections sees a threat, The Five Percent see the persecution of the people in the Nation who are living out the culture, of truth, with peace, using knowledge, wisdom, understanding, mathematics, and the science of everything in life for balance. Inmates in lockdown have filed suits in the U.S. District Courts against the prison complex system.

The Directors of the prison said that because a few five percenters were associated with the rioters the department placed 300 suspected members in lock-down across the state. Those who have been released had to convince officials that they were never a part of the Five Percent or renounce their culture by signing a form. Five-Percent members are in lockdown indefinitely because they refused to sign a paper renouncing their Culture and/or Creed. Due to the harsh conditions of solitary confinement, most prisoners sign renunciation forms after being confined in solitary. Most prison systems have also banned all Five Percent literature and, some prisons forbid the writings of Elijah Muhammed. The NOI has been recognized by the federal courts as a religion for years. While the Five Percent claim scripture that is unique to our culture, such as but not limited to, (Supreme Mathematics & Supreme Alphabets) followers often read the Holy, Qur’an, and/or Bible. The Department's policy manual requires that a report of rules violations be completed for every inmate placed in solitary. A report for The Five Percent Nation lists the reason for their segregation as, Pending investigation for inciting or creating a disruption of institutional operations.

Department officials refused to discuss the inmates in lock-down, the classification of gangs, prison policy regarding gangs nor what criteria are used to determine a legitimate Religion. Federal Bureau of Prisons spokesperson initially said that the group was considered a gang, but later amended that comment to security-threat group. The Department feels they are not a significant management concern for us at this time. Department heads stressed that the government does not track inmates based on their religious beliefs, but can track them according to behavior and conduct. The federal prison system reserves judgment whether the Five Percent are members of a Religion/Creed or Gang. Georgia's Department of Corrections has paid closer attention to its small group of Five Percent, according to a Representative of Corrections, but does not treat them as a gang. Corrections state we are watching them like they were a loosely affiliated group of people with similar interests. This group that causes corrections departments to split hairs over terms like "gang" and "religion" was founded in 1964 by Allah the Father who the Muslims under Elijah Muhummed called him (Clarence 13X), he started teaching his first students in 1962.

Born Clarence Smith in 1928, he moved to Harlem from Virginia in 1946 and joined the NOI several years later. He was a member of Temple No. 7, under the leadership of Malcolm X, he was a gifted speaker and rose quickly to the position of Minister. When Allah left the NOI in 1963, he took the lessons of the honorable Elijah Muhammed to the streets of New York. The Five Percent doctrine remains closely linked to 120 Lessons that the Father was teaching back in the early 60s. The Father added to Elijah's teachings, reasoning that the collective Blackman is God. For the Five Percent Nation, "The Culture is I God, and we have no so-called religion!" Thanks to Allah’s close relationship with Mayor John Lindsey, in 1967 the Five Percent leased a piece of Harlem property from the city of NY. (A lease of 99 years) The Allah School in Mecca still serves as The Five Percent headquarters. Unknown assailants assassinated Allah the Father two years after the Allah School in Mecca was opened, yet some of the Five Percent teach that the New York City Police were behind the plot to kill Allah. Allah taught that once a man achieved mastery of self, he became a God, in so far as that he controlled his destiny. Five Percenters are men that refer to themselves as Gods and women as Earths, and the culture is commonly referred to as I-God. The Five Percent teaches Supreme Mathematics, Supreme Alphabet, (12 Jewels) and 120 lessons, a mathematical system devised by Allah wherein each letter or numeral denotes an idea with an accompanying parable. "A" stands for Allah, "B" is Be or Born, "C" is See, and so on.
For example, the fourteenth degree of the Supreme Alphabet "N" stands for Now Nation (End), and begins something like this, now is the time for knowledge of self and for the original man to wake up and come to the realization of His self as God, which is his true Self, or end in a pit of ignorance. The Father’s mathematics was delivered in a "rapping rhythm" that elevated the New York City youth. The Gods are trained to deliver their science, and the group has won converts by the hundreds. Today the group numbers in the thousands in the United States and overseas. In an environment where a bowel movement is a public event and every request a power struggle, adherence to an ideology that defines the collective Asiatic Black Man as God is a political act, a manner in which to register protests against the institutions of the system. There are, no doubt, some Gods who joined The Five Percent for free knowledge wisdom, and understanding of God and man. The movement tends to flourish in environments of impoverishment and decay because the message speaks directly to the disenchanted. By the seventies, the Five Percent had become part of the American inner city experience, and years later the group had organized meetings on the West Coast from Seattle to Mexico. Rap artists like Rakim, Big Daddy Kane, and La’kiim Shabazz use the Five Percent flag on album covers and have written lyrics influenced by 120 degrees. The Five Percent continues to be dominated by young adherents. Part of the allure is that there is no leader but Allah and the group's meetings, called parliaments, generally occur in public places. Department of Corrections: This group has been viewed as the most threatening 'gang' by the system because they are young and win converts by preaching racial consciousness with a potent inner-city jargon. The Five Percent Nation does not teach violence. Bilal Allah noted in an article, The task at hand is to maintain one's righteous existence while teaching others to be righteous. We place a major emphasis on being articulate and well-read. Arguments in court will likely revolve around what constitutes a legitimate religion. It has been pointed out that the Fourth Circuit has recognized other religious groups with a loose structure like The Five Percent Nation of Gods & Earths.

Some are located in the Ghettos of Hell, the educational system, law enforcement, penal institutions, and high Government offices in the United States of America.

2) Q: WHAT NATIONALITY ARE FIVE PERCENTERS?

They look like you and me. Some are in high society, some are dressed poorly, but all are either European or Asiatic.

3) Q: WHEN WILL THEY MAKE THEMSELVES KNOWN?

They are making themselves known every day through their people, mostly the deaf, dumb, and blind whom the so-called righteous have not taught for they have failed to do their duty, which is to teach the uncivilized. There is a punishment for such actions, which the people will inflict upon them for not telling the truth, the truth that was taught to them, through the Messenger of Almighty God.

4) Q: HOW WILL THIS PUNISHMENT COME ABOUT?

Through a mental and physical fight throughout the land, with all persons places, and things on the planet earth but mostly in North America.

5) Q: WHERE WILL MOST OF THIS FIGHTING TAKE PLACE?

Most of this bloodshed will take place southeast, northeast, and southwest. The West will be the fountain of dripping blood, insanity, murder, rape, and 85% total violence.

6) Q: HOW WILL MOST OF THE RIGHTEOUS SURVIVE?

The only ones to survive this catastrophe will be the 5% who have taken it upon themselves to learn and listen. The 5% are the poor righteous teachers. The 5% are righteous to the degree of and between 85% and 10%. They have enough knowledge and wisdom to control themselves and make up for the 10% and/or 85% of unrighteousness’ lacking in them. Hell is built upon imperfection, or it would not be considered Hell. Things are only right to a certain extent, due to the people who constructed them, having imperfect capabilities.

7) Q: HOW CAN WE SURVIVE THIS HELL THAT IS DUE SOON TO BREAK LOOSE?

Survival is through different aspects of light that have been given out; in the form of knowledge, wisdom, and understanding the light has been given to fit any occasions that would prevail itself at any given time; to recognize different segments of time as it has been given to man. If one fails to recognize it before it is upon you, it is one's fault. There is no amount of pity given out, only total suffering when the time has been appointed, this happens individually and collectively due to certain circumstances prevailing in the United States of America.

8) Q: WHAT SHOULD THE BROTHERS IN THE WILDERNESS OF NORTH AMERICA DO TO COUNTERACT THIS DOWNFALL THAT WAITS?

As the Messenger of the Creator has taught, one should study lessons, and read the Holy Books, and so says Almighty God. Keep the company of the righteous, brothers who are trying to sustain themself in Islam, Hebrew, Coptic, and/or any of the many cultures or creeds of the earth. Most of all Asiatics who will teach Asiatics who are lacking in knowledge and wisdom so says Almighty God. This is the time for all single brothers who have not continued themselves on through their seed, to merge and enjoin with a woman; come together with one another so says Almighty God Himself, for surely one will find it very difficult from here on.

9) Q: WHERE IS THIS WISDOM AND LIGHT THAT IS SO NEEDED?

There isn't any "more light" to be given; it is incumbent upon each individual to find and search for what he or she does not have, for surely the time is not far off.